We're hosting a Victorian themed Halloween party later this year and the children and I have been using the summer holidays to get ahead with preparations.  We have crafted some fantastic, if rather macabre, decorations (which are going to be featured in a national magazine!) and we're now busy planning menus.

Today we made 'Crocodylus Niloticus' in honour of Doctor Livingstone's search to find the source of the Nile, as well as highlighting the evils of slavery. 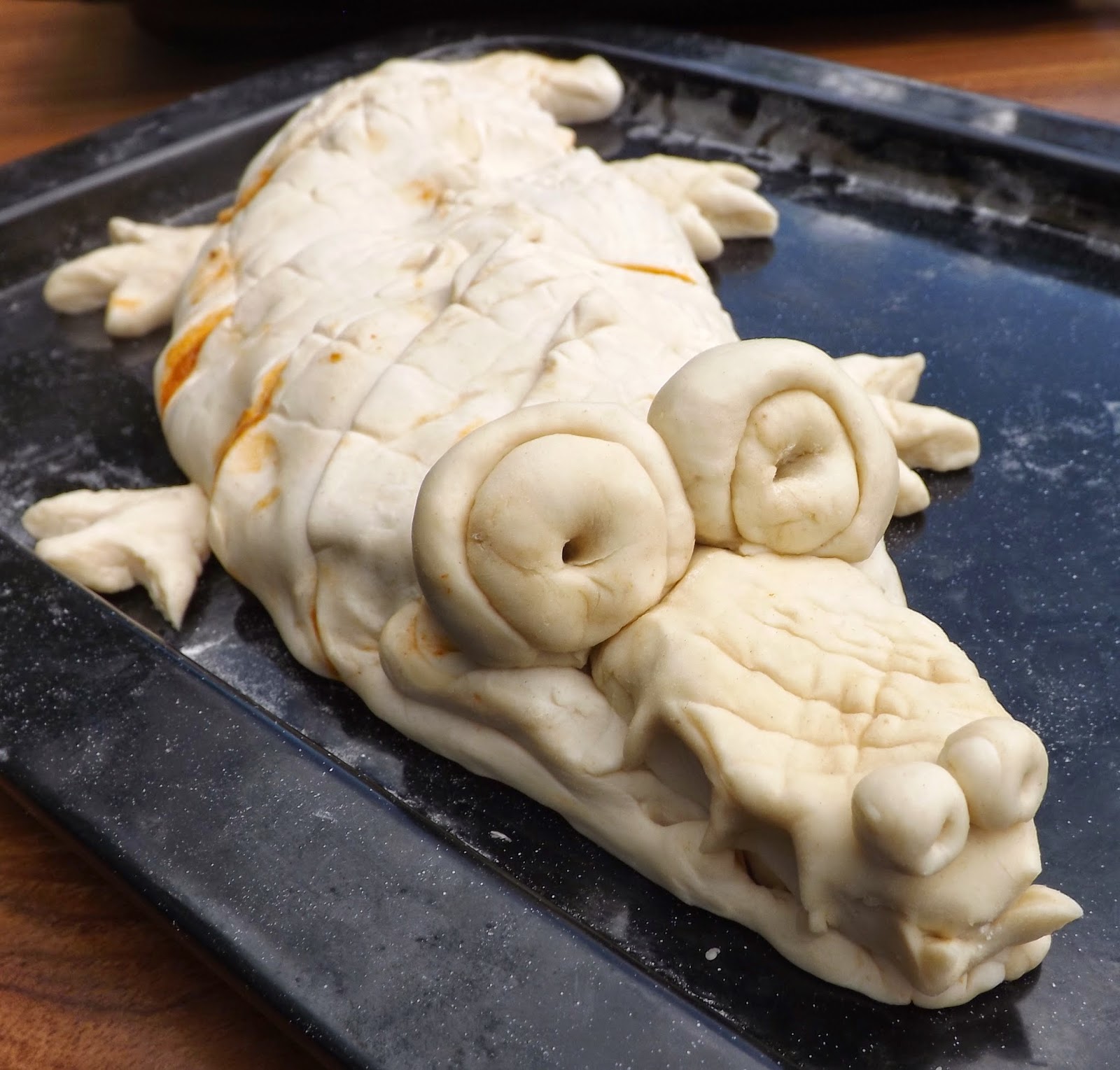 The Nile Crocodile in pastry form! 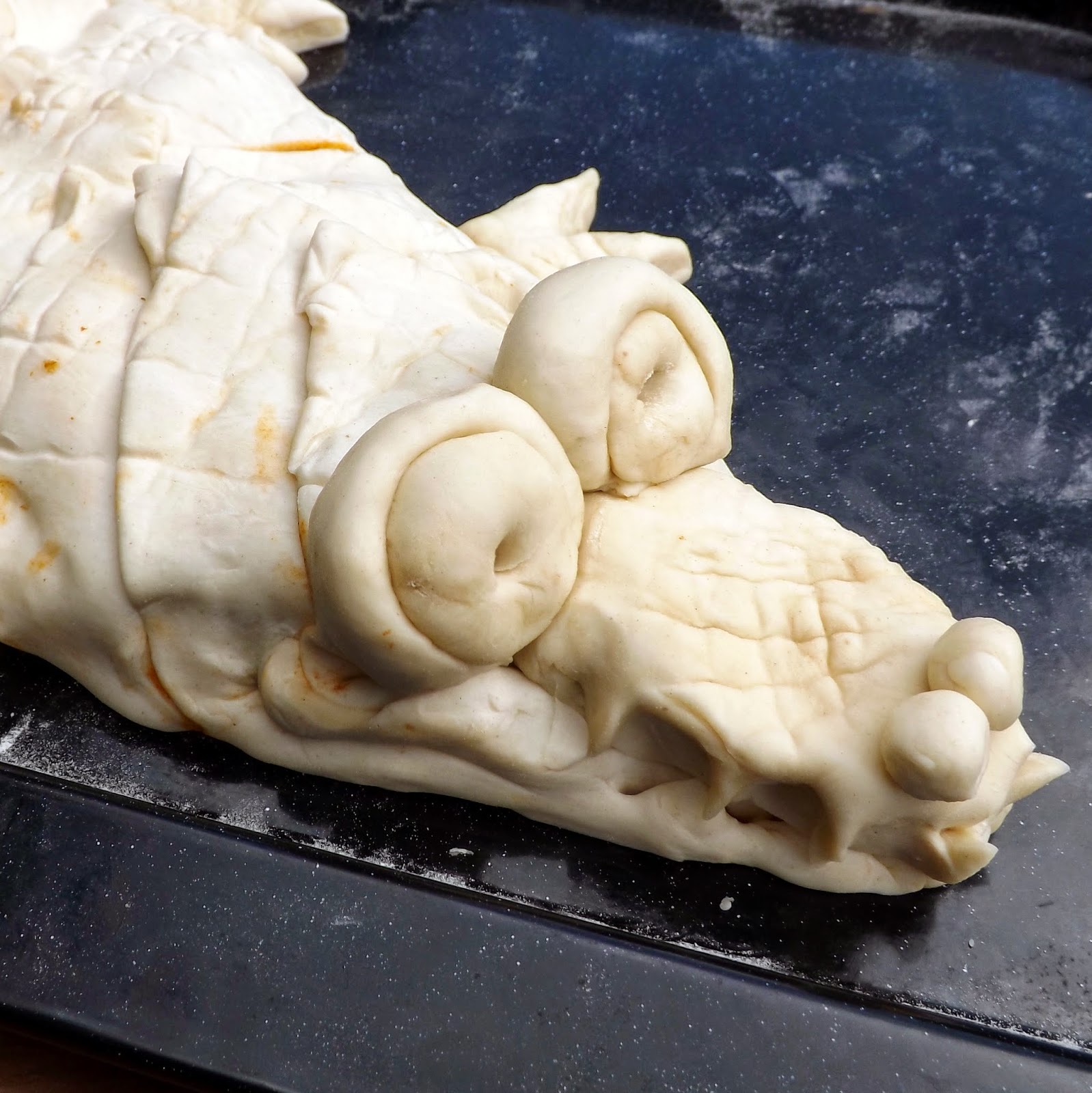 Check out those teeth

We made two versions but in between dodging the rainstorms, which apparently are the result of the tail end of hurricane Bertha, we ended up with the 'before' pictures of one and the 'after' shots of the second! 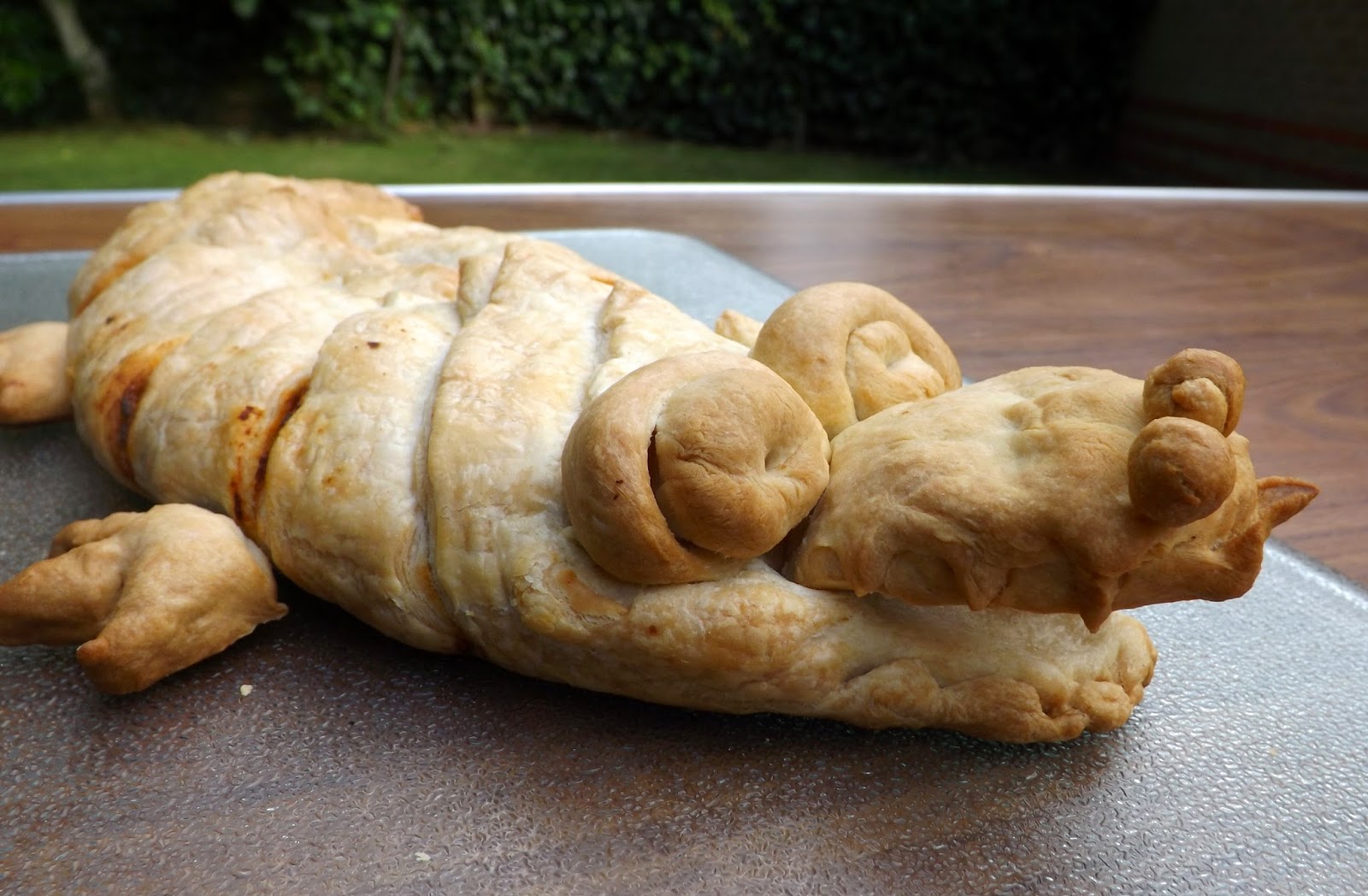 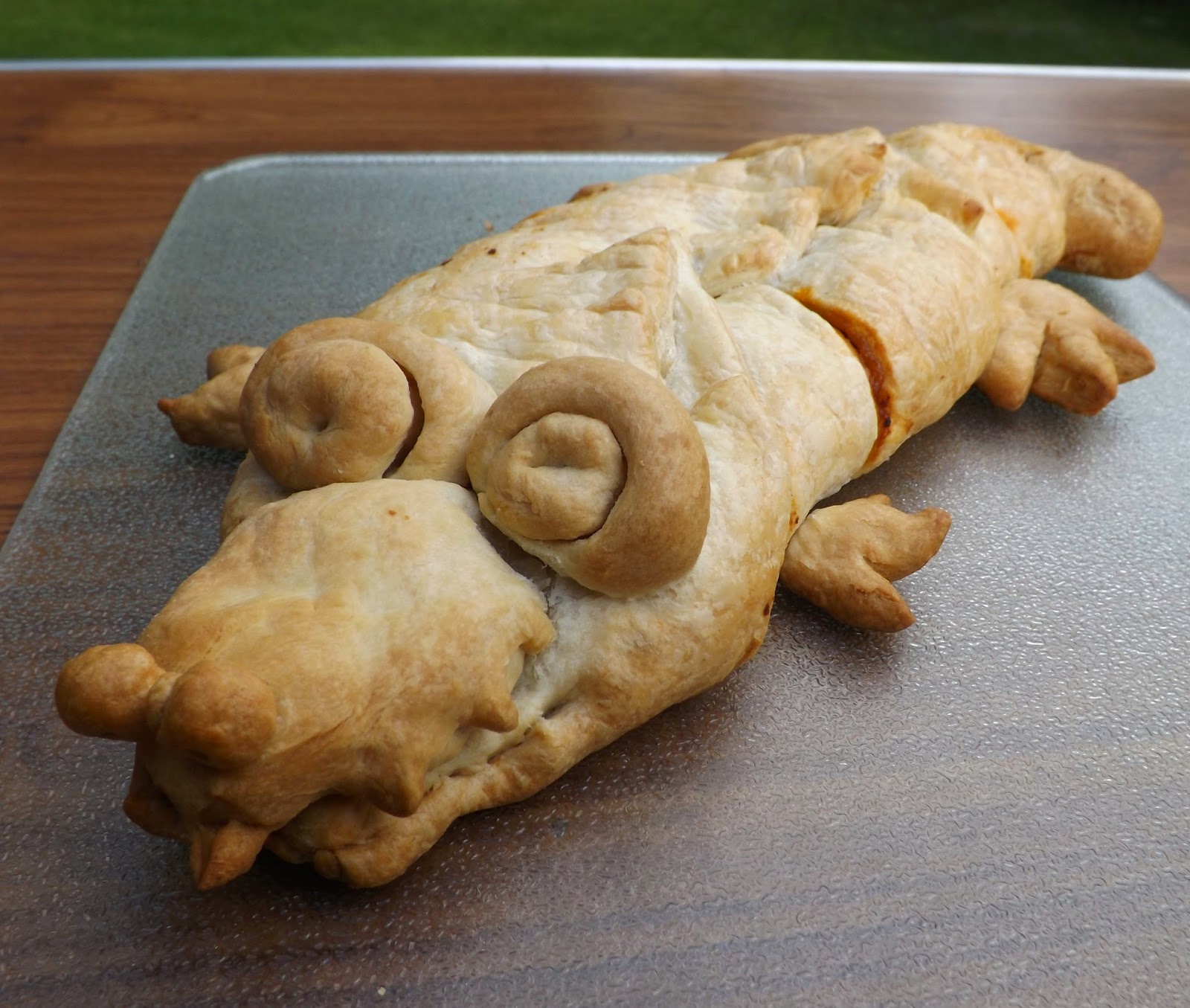 The first specimen was made using shortcrust pastry and when cooked it looked much better than the second, created with puff pastry. This was due to a lot of the detailing being lost as it 'puffed' up during baking. 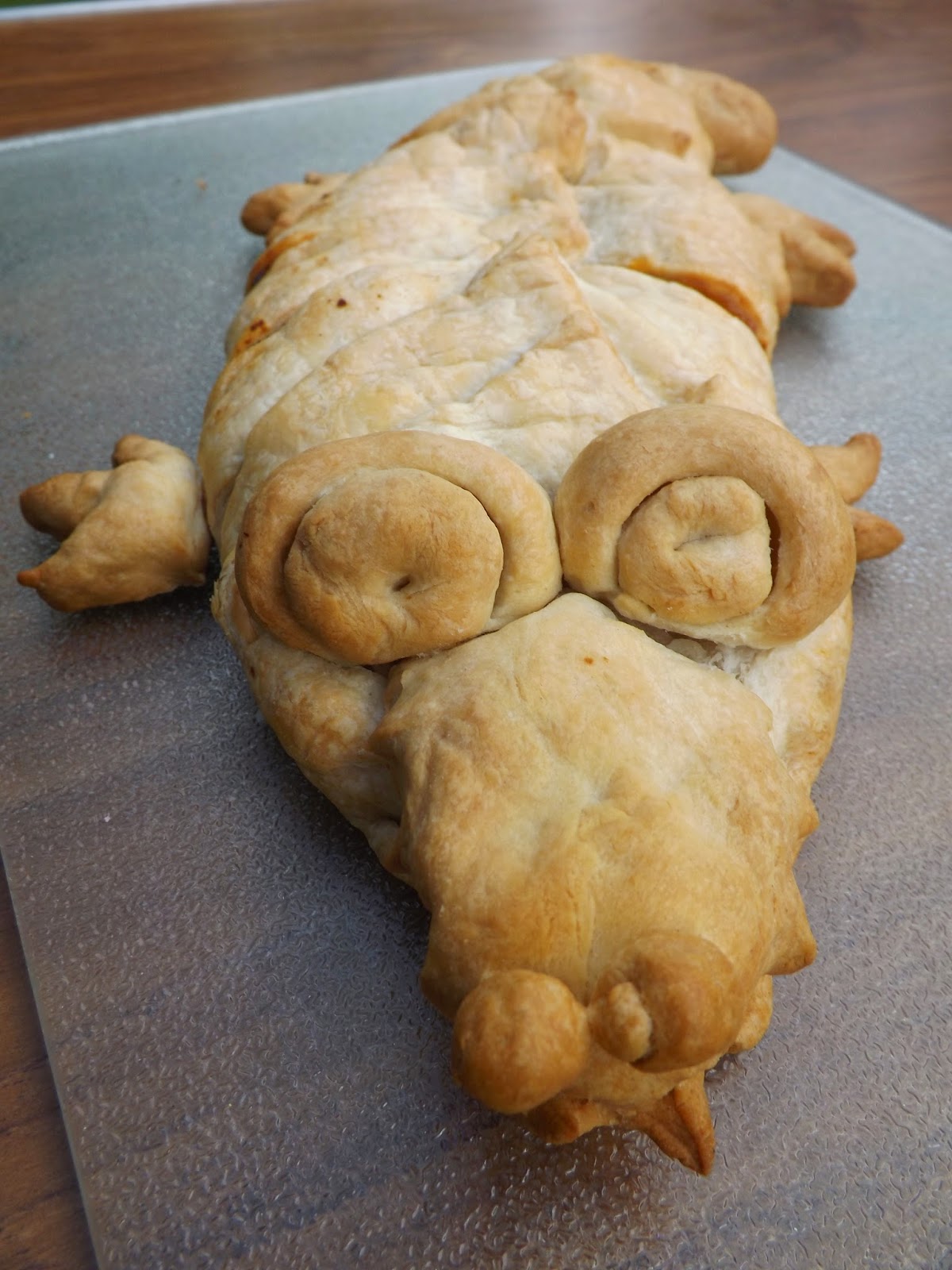 Continuing in our mission to expose the children to as much culture and travel as possible, we've just returned from a quick trip to Krakow.  We wondered if they might find it rather similar to Prague, but they were more than able to distinguish between the two cities and had a fabulous time.

Much of our time was spent soaking up the sights in the Rynek Główny, Krakow's beautiful main square which dates back to the 13th century and is Europe's largest medieval square.

We stayed at the Hotel Senacki, a lovely little boutique hotel situated on the historic Royal Way, the old route of Kings and Queens as they processed from Wawel Castle to the main square.  The position couldn't have been more perfect as it was literally a two minute stroll to either stunning location.

Church of St. Peter and St. Paul from hotel window

Wawel hill rises high above the river Vistula and behind its heavily fortified ancient walls are the awe inspiring Cathedral and Castle.  As the seat of Poland's Royalty, it was site of the coronation and burial of practically every Polish monarch. The cathedral has a number of chapels and one of the most beautiful is King Sigismund's, its stunning gold dome claimed by some to be the best example of Renaissance architecture outside of Italy, if not within. 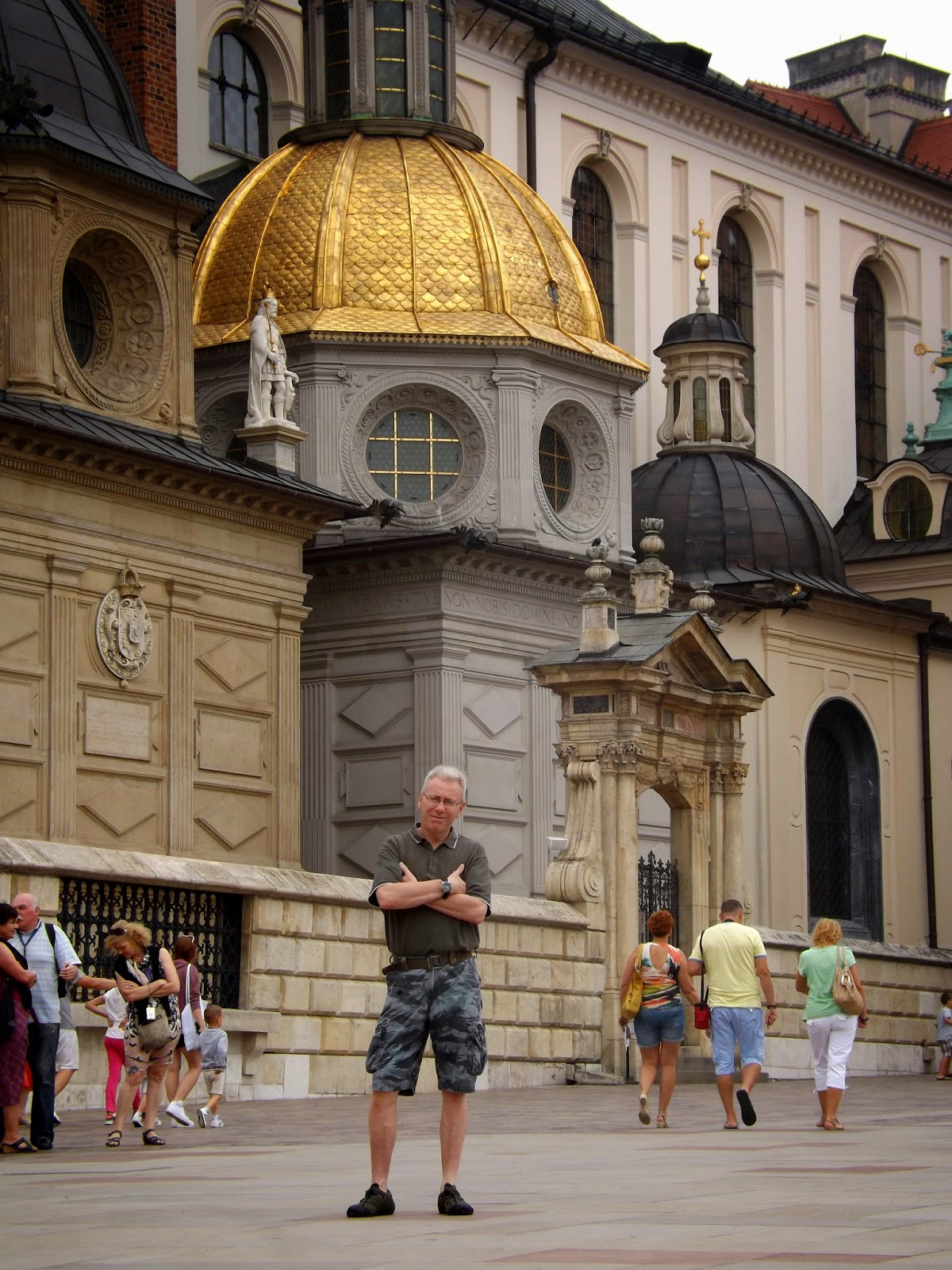 After careful deliberation we had decided to take the children to Auschwitz and as part of the preparation for this we visited Kazimierz, Krakow's former Jewish quarter. This in itself was a very moving experience and a simple whitewashed sign served as a reminder of how swiftly families, who had been resident in the area for hundreds of years, were so brutally eradicated. 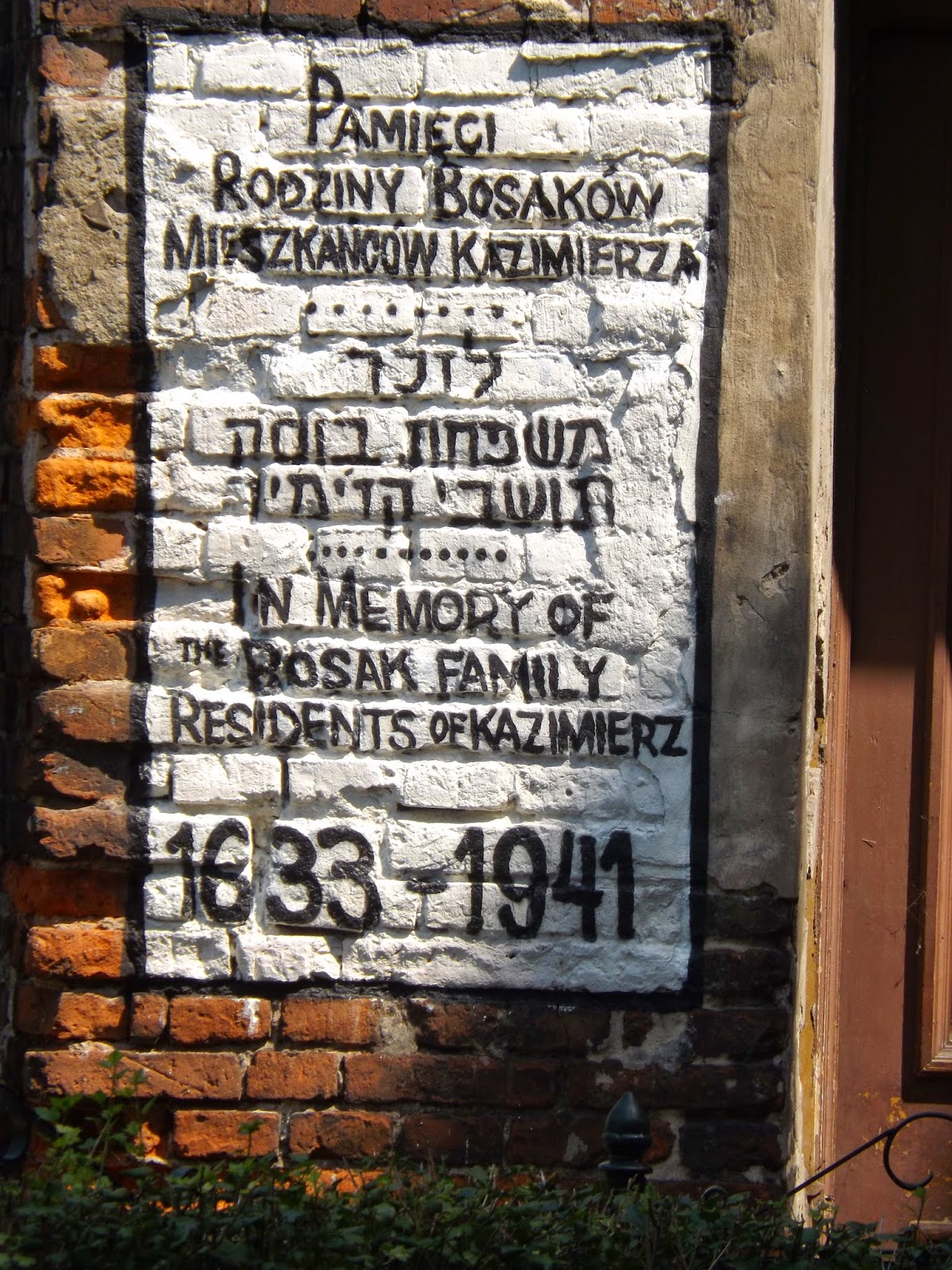 Auschwitz is obviously not your usual holiday experience and it's difficult to know how to describe it without sounding trite or insincere.  I also wasn't sure whether it was appropriate to take photographs, let alone share them on social media sites but I feel we all have an obligation to educate ourselves, and our children, about the horrors humans are capable of inflicting upon others. 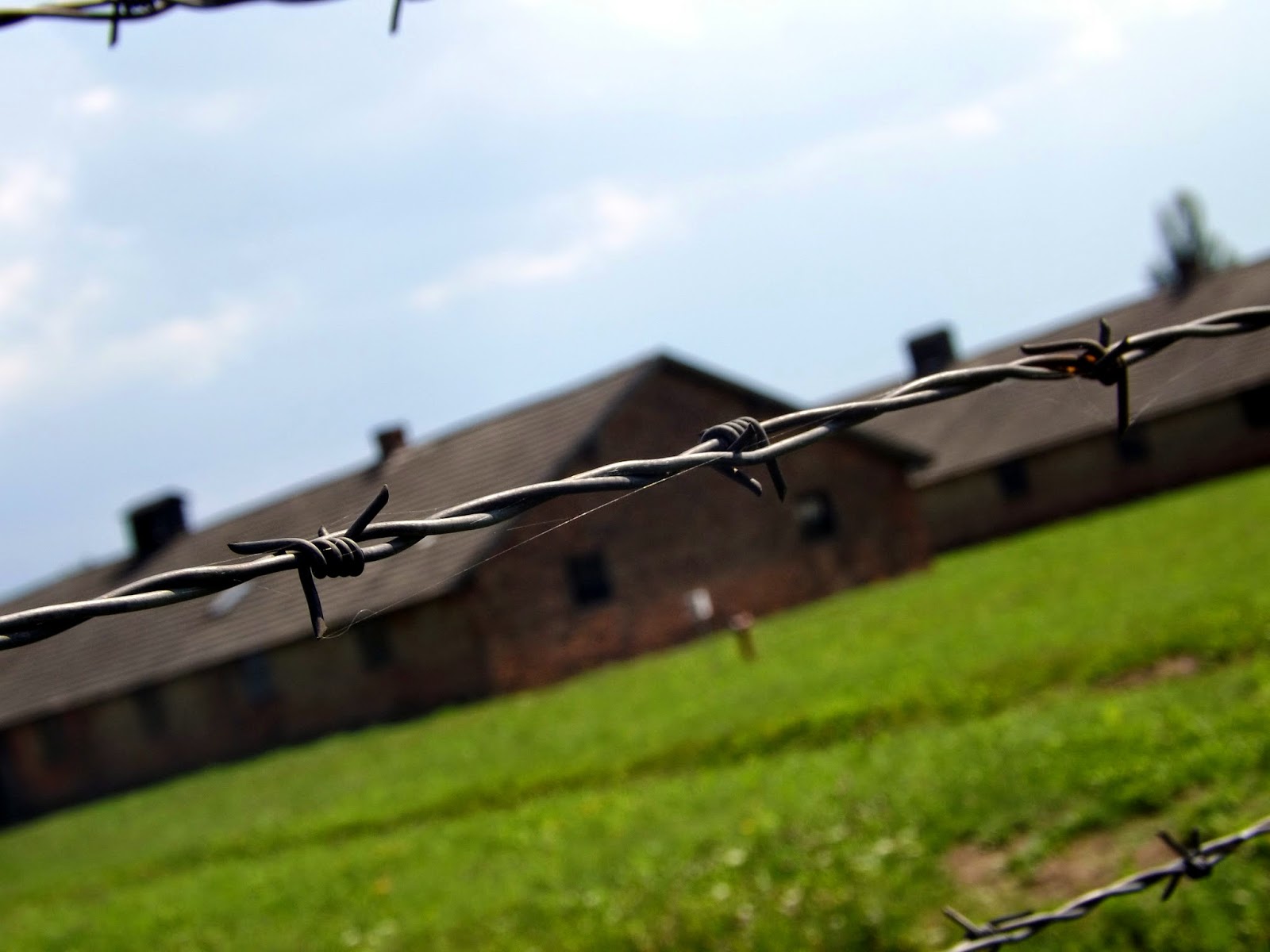 The sun shone throughout our visit and the meadows surrounding the camp were full of summer flowers, with birdsong filling the sky, and it was this air of normality which was so frightening - To know that mass murder took place in these grounds, within living memory, was a very sobering thought. 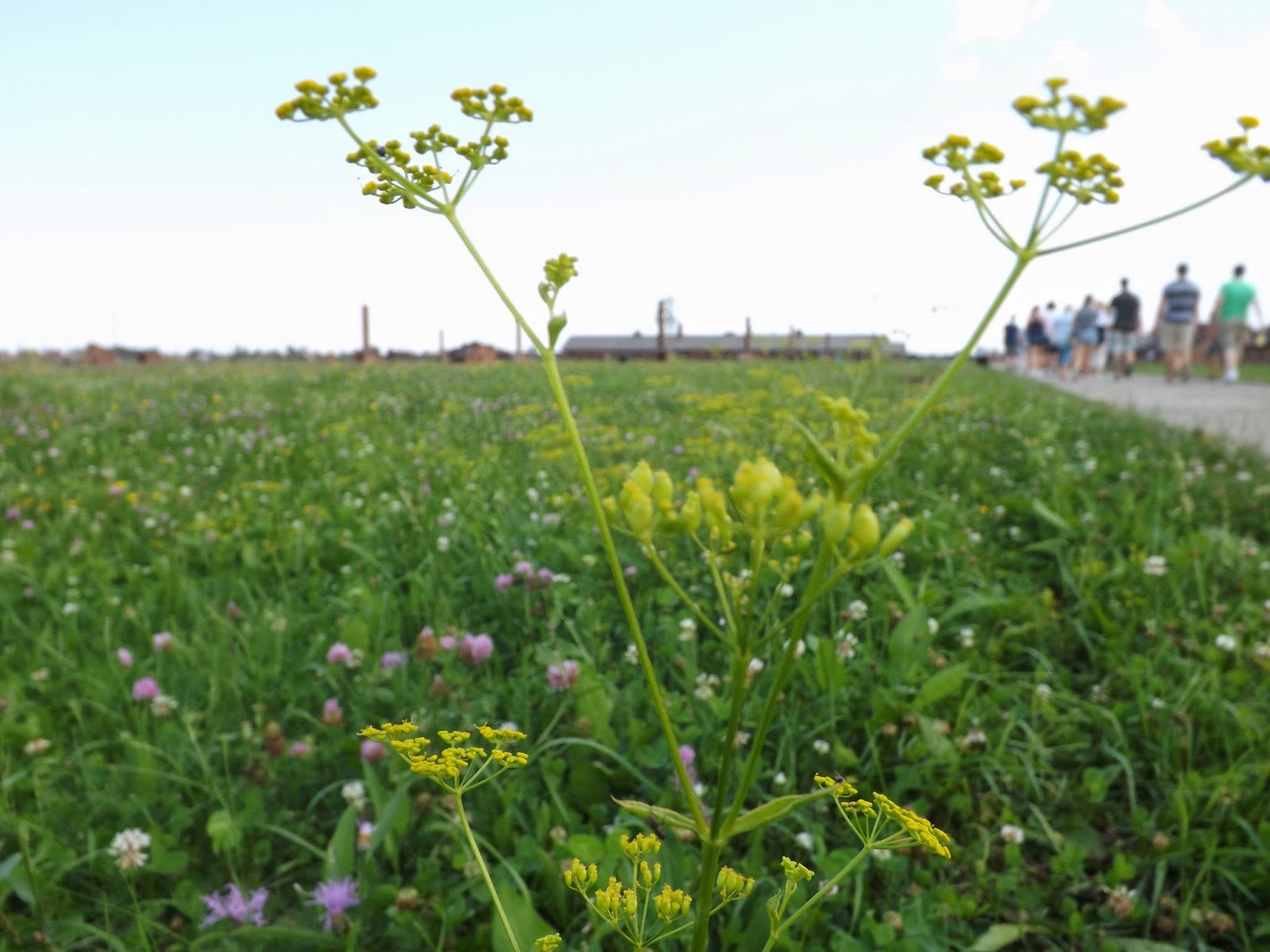 As we drove away our Polish guide pointed out the town of Oswiecim which exists in the shadow of the death camp.  After decades of trying to separate itself from the dreadful legacy of torture and mass murder, it has now adopted the slogan 'City of Peace' for its official title and hosts a number of festivals, concerts and other events designed as initiatives of world harmony.  Auschwitz was a difficult day and it was comforting to end the trip on a positive note. 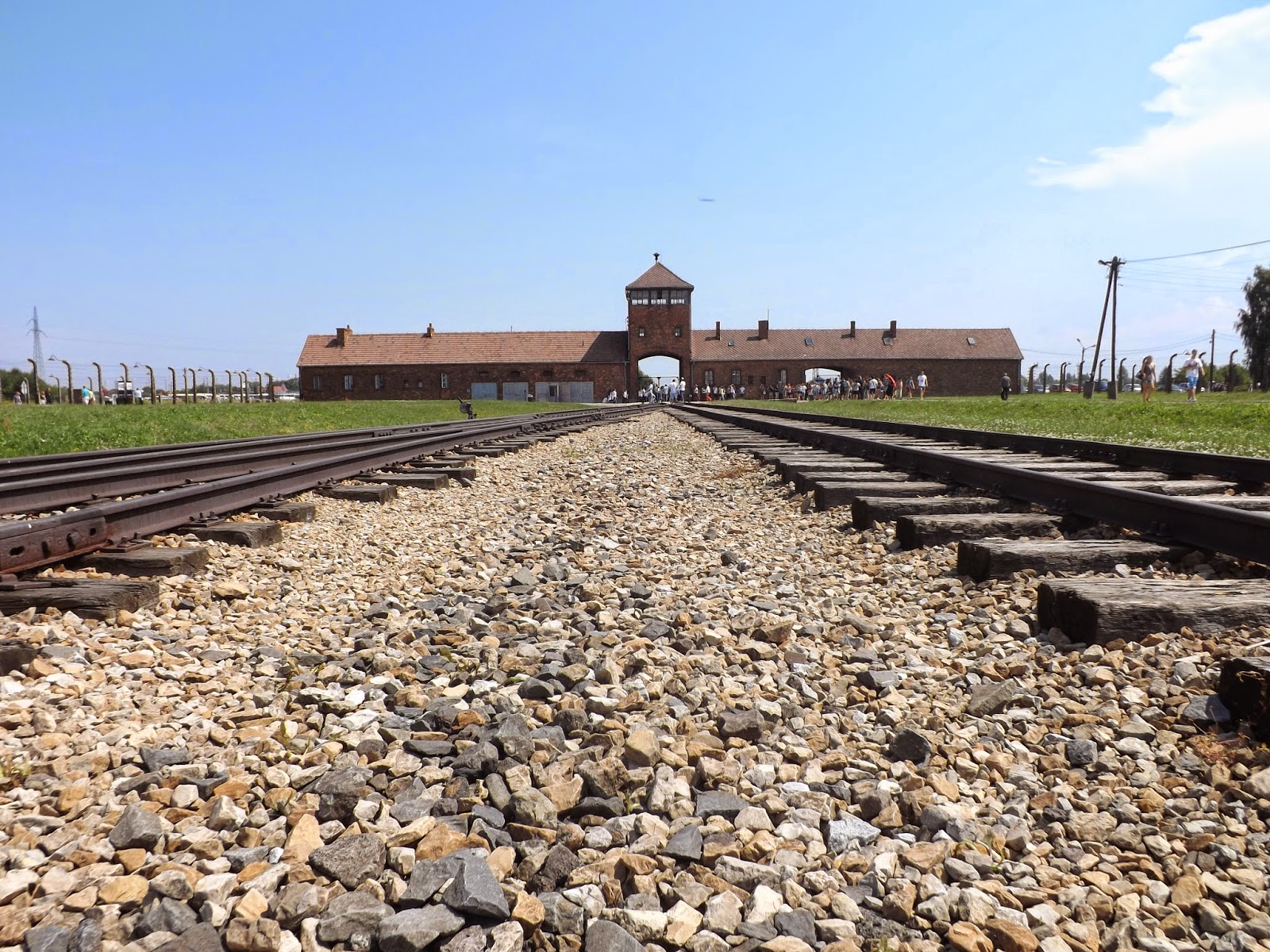 One final positive element to the trip was sharing our time aboard the coach with a lovely American couple who were extremely gracious in giving their time to our children who were full of chat and questions!   Marty and Cheryl are very well travelled and have grandchildren of an age with our kids so were able to connect with them in a very natural manner.  We are fortunate to live in a very beautiful city which is a UNESCO World Heritage Site and a perfect base for exploring the North of England and Scotland, and we would be delighted to show it off to such pleasant visitors!

The food in Krakow was delicious and cheap, we indulged ourselves with pierogi (dumplings), bigos (stew) and placki ziemniaczane (fried potato cakes) at the Bicicletta Restaurant, a lovely little diner in the Jewish Quarter and the meals came to less than £5 including drinks. We also enjoyed plenty of street food including Zapiekanka, a Polish version of pizza or open toasted baguette loaded with mushrooms and cheese. 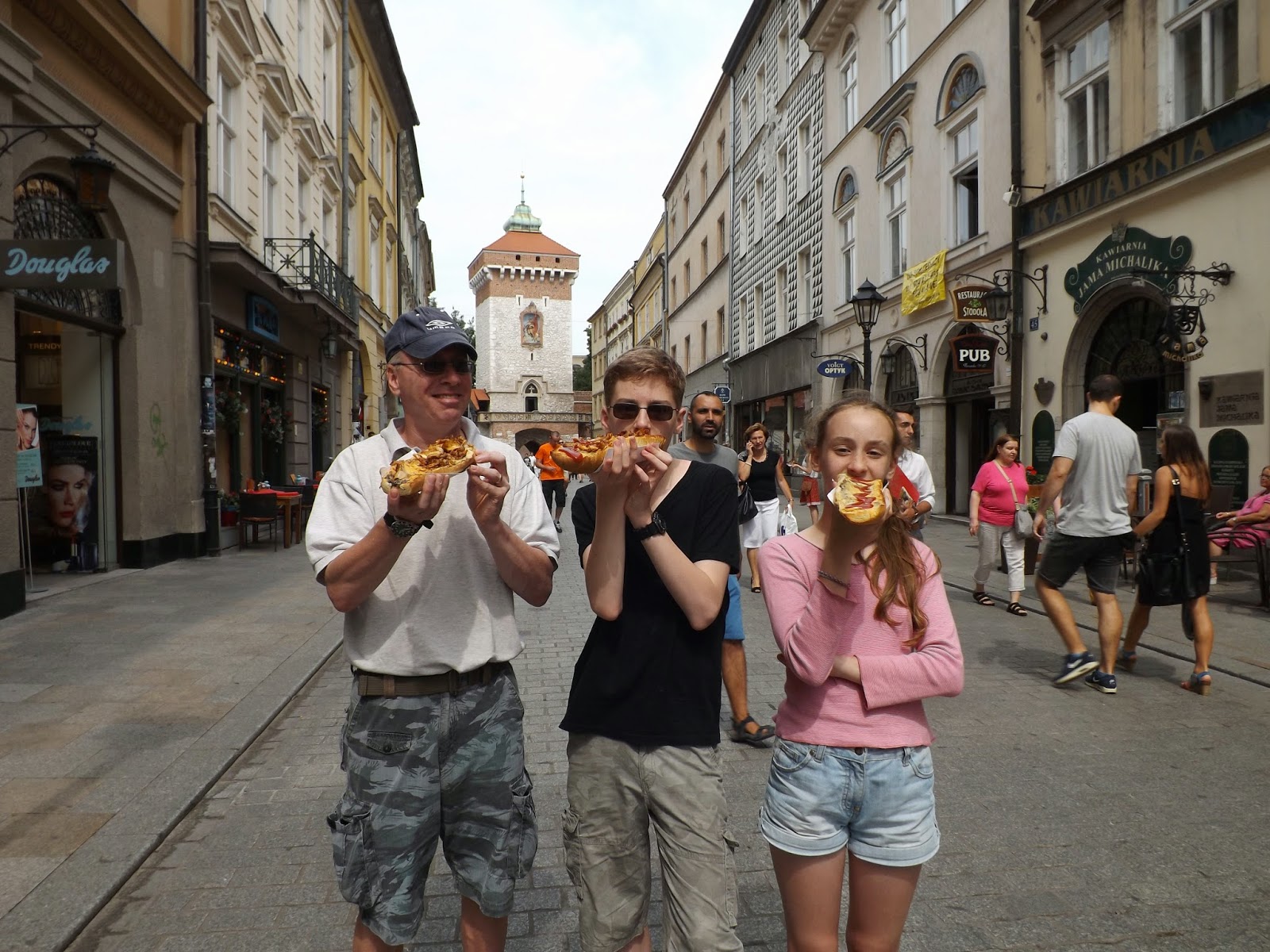 
We also found time to visit the Wieliczka salt mine which the children loved, but unfortunately the basic camera we took with us was unable to cope with the lack of light underground so we didn't end up with any pictures worth sharing.

Our niece is booked to fly to Krakow next month and will hopefully enjoy exploring this beautiful city and welcoming country as much as we did. 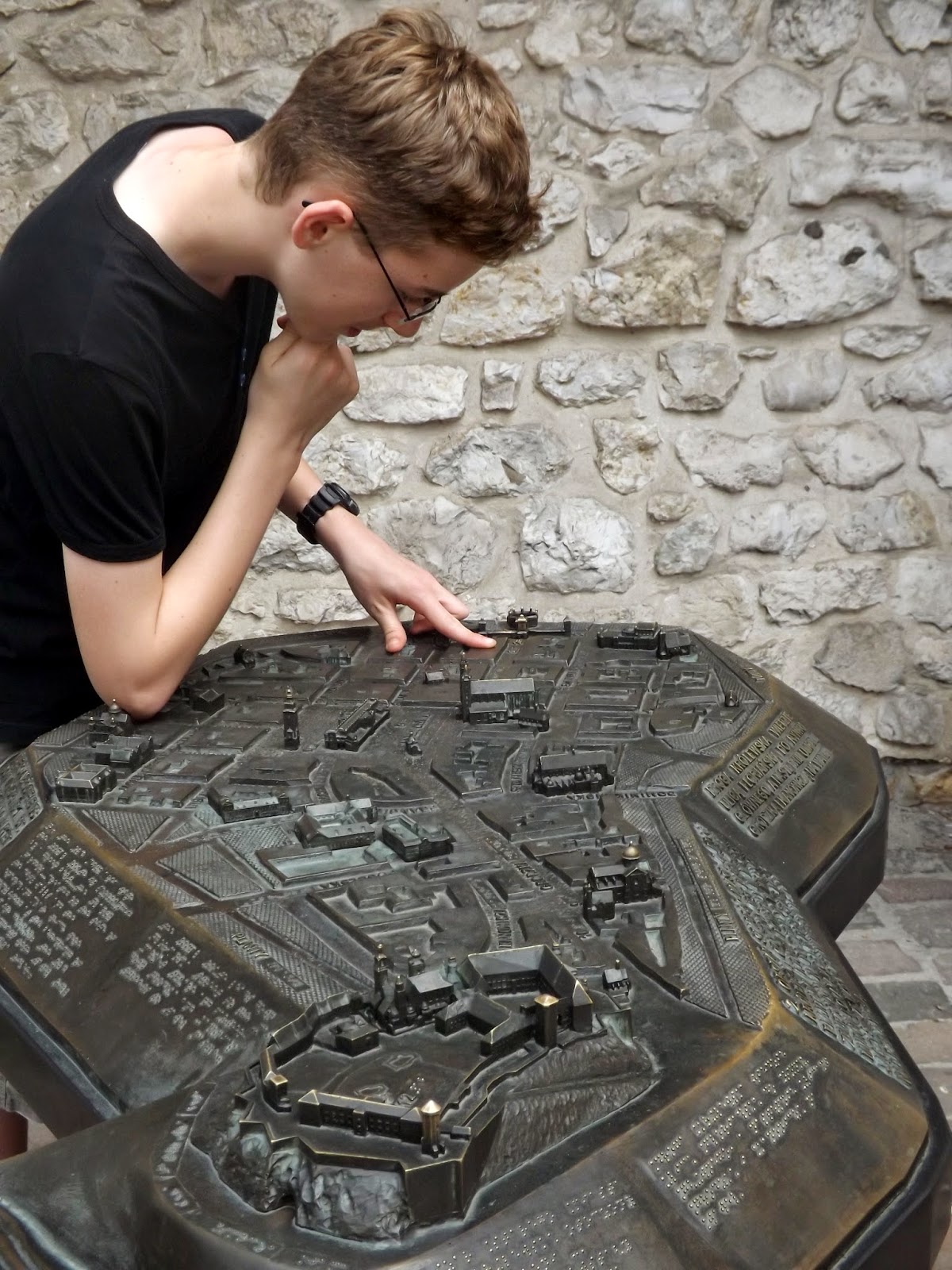