Having a cosy Christmas time

We've had a joyful season surrounded by family and friends and I hope you have all had a wonderful time too.  Christmas Morning Mass was a beautifully chaotic affair and led almost totally by the children.  All three churches in the Parish come together at both Easter and Christmas and it's always lovely to see the children taking full part in the proceedings.  George delivered both the first and second readings, Alice read part of the bidding prayers, Rebecca sang the responsorial psalm and Lucy and Jenny read the Gospel.  Ayana and the girls also altar served ably lead by Joseph.  They were all fantastic and didn't seem in the least bit fazed by a congregation in the hundreds!

We only open stockings before church, so once the dinner (turkey wellington) was safely in the oven, we settled down to open the rest of our presents.  Mr Larkin and the children gave me a new hair dryer to replace the one I've had since school, as it is now inclined to cut out mid-use.  Hopefully this new one will also deliver thirty years of service!  Darling Mr Larkin also presented me with a beautiful poem fresh from his pen.

Alice was very pleased with a new school bag and complete box set of the 'Heroes of Olympus' books by Rick Riordan.  George had a couple of new games, a set of headphones and a seven book set of the 'Game of Thrones'. Mr Larkin was delighted with a Charles Tyrwhitt shirt and some new hi-vis cycling tops.

We spent the rest of the day fairly quietly as we were saving ourselves for 'Boxing Day'.  This is very much a part of a traditional English Christmas and many people chose to spend it with close friends or family.  We dragged some trestle tables out of the garage and had a full sit-down Christmas dinner with ourselves and three other families.  It was a glorious day and we built up an appetite for lunch with a walk around a local lake and ancient woodland known as 'The Scrogs'.

I was stitching right up until Christmas Eve and this year's theme was tea cosies.  The first one was for Alice's godmother who is also one of her teachers and she kindly gives up at least one lunchtime a week to teach Alice and a friend the flute. 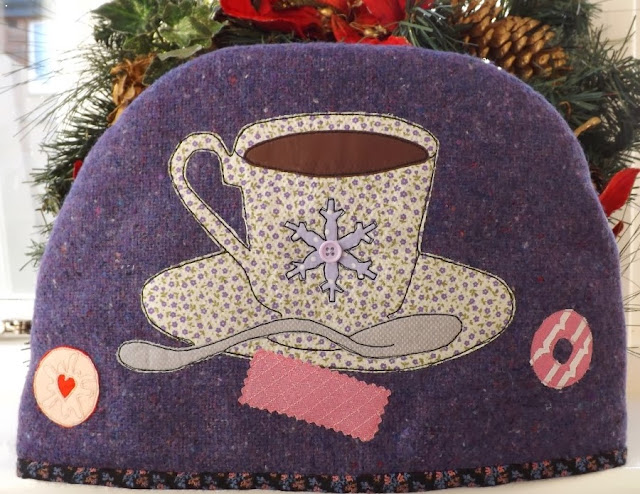 As you can see I made it from a beautiful piece of purple tweed and I gave the teacup design a festive tweak with the addition of a snowflake. The back featured a personalised Christmas label. 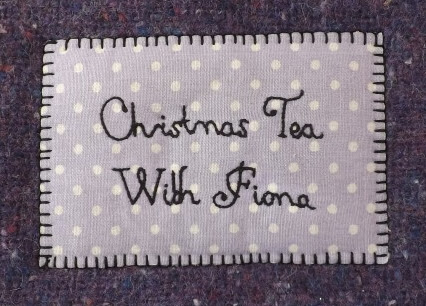 The script was formed using free-motion machine embroidery and the black stitching used to highlight the applique pieces was applied in the same manner.  The cozy is very dinky and the perfect size to cover a pot of tea for one.  Just the thing at the end of a long day's teaching! 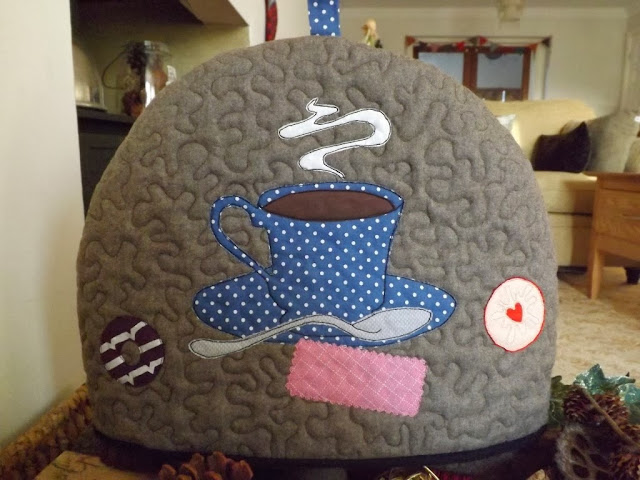 The next two were somewhat larger and should fit a family sized teapot.  They also had little personalised labels on the back but as the light was fading on Christmas Eve by the time I finished I didn't get any decent pictures. 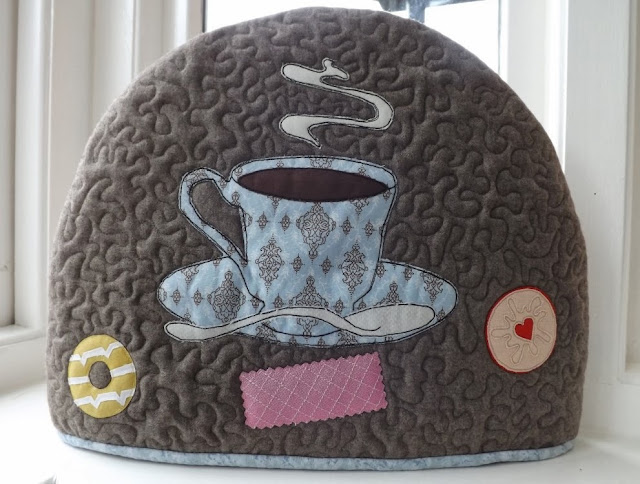 
Last winter I made these cafetiere cosies and lots of people mentioned how much they liked them, so this week I finally got around to making a couple more. 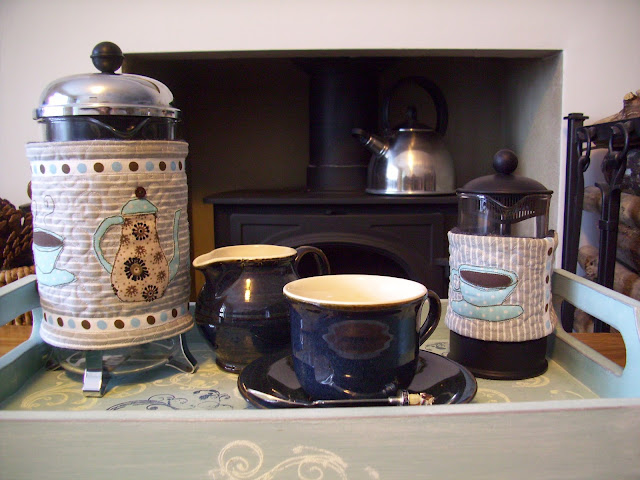 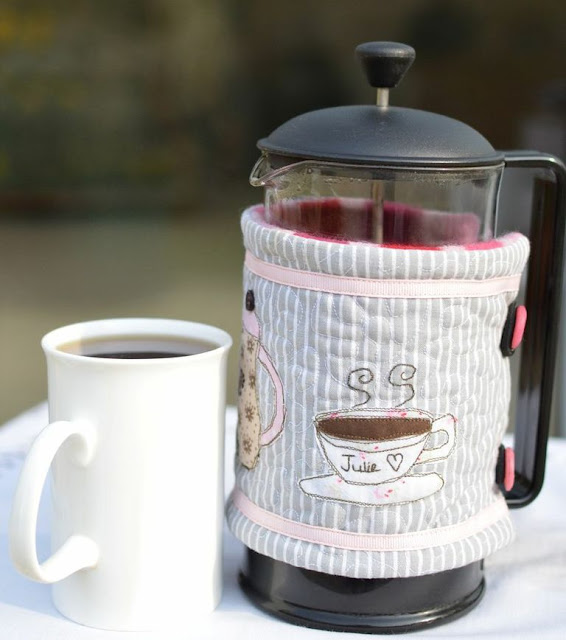 I purchased some Starbucks' themed 'French Press' sets and got to work.  The first thing to do was discard the flimsy red wraps they came with, (I'm thinking I might turn these into hanging 'wool' hearts for the tree) as they were made from a synthetic yarn and were way too thin to offer any insulating properties at all. 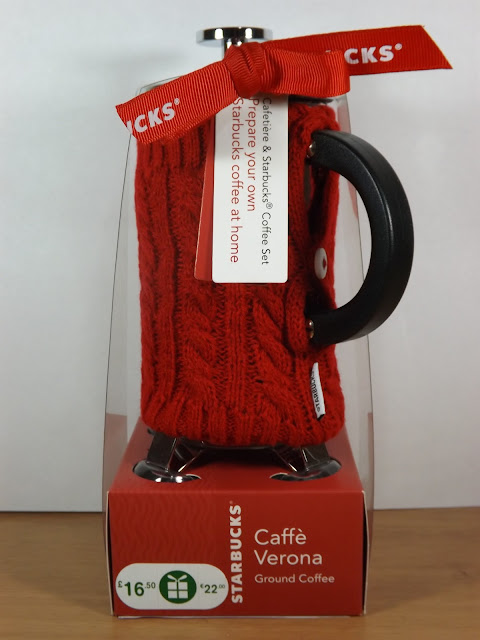 I dug out my stash of felted wool jumpers and scarves to find a far more suitable wrap.  If you want to produce your own pure wool felt, just throw some old knitwear into the washing machine on a boil wash, it's that easy!  One quick point to note though, is that if you wash a load with mixed colours, then the fibres tend to transfer to each other.  You can see evidence of this on the dark brown sweater below.  I actually quite like this effect as it gives the final wool fabric a nice artisan appearance! 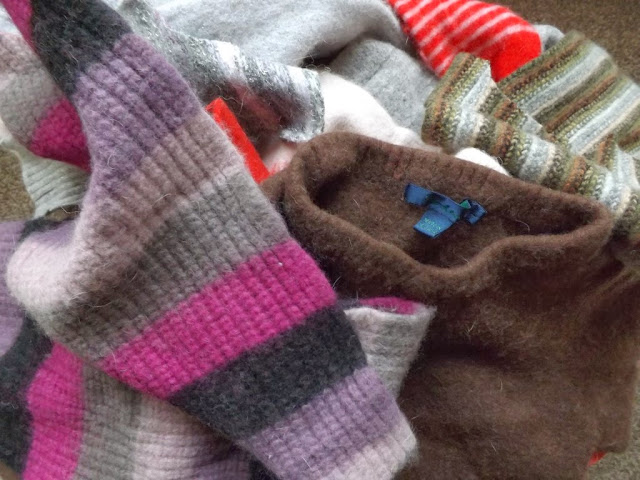 This method creates the most gorgeous tactile material which any member of the family would be happy to snuggle into. 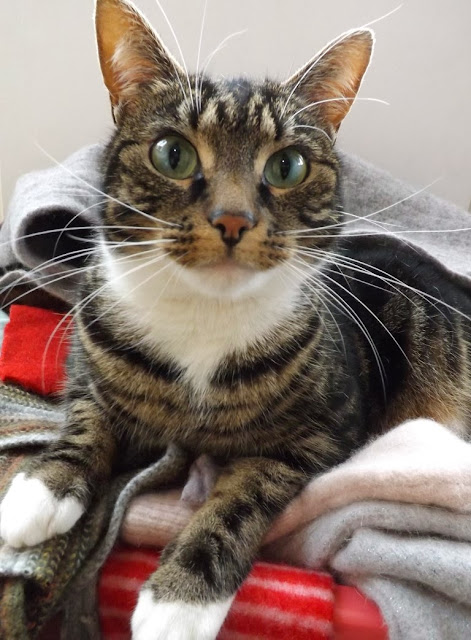 Once I had wrestled my choice out from beneath bad kitty, I got cutting and stitching and this is what I came up with........ 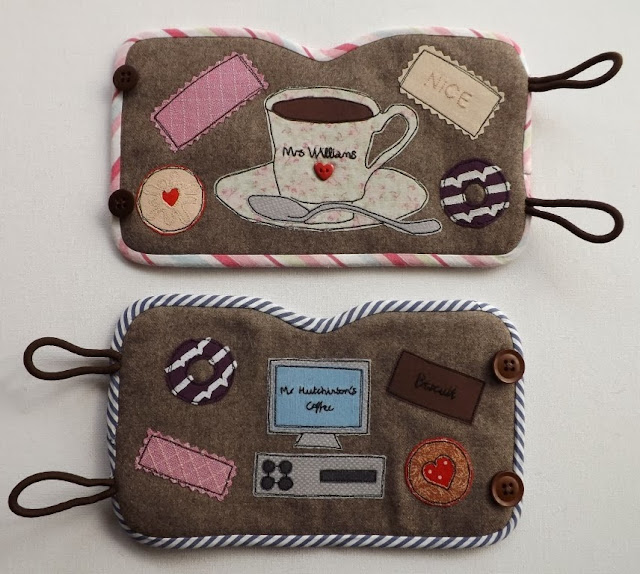 We decided they deserved a little Christmas present as they write and produce the annual 'Panto' at school.  For non UK readers, Wikipedia describes this typically British Christmas tradition thus;

"Pantomime includes songs, slapstick comedy and dancing, employs gender-crossing actors, and combines topical humour with a story loosely based on a well-known fairy tale.  It is a participatory form of theatre, in which the audience is expected to sing along with certain parts of the music and shout out phrases to the performers."

The writing of a production containing 'topical humour' must take hours and this, along with numerous rehearsals, on top of their normal teaching week, represents a very impressive commitment. They take their production out, for free, to the local community and lots of primary school children and old folk get to share in this lovely tradition.

We chose a computer themed motif for the second cosy as the teacher for whom it is destined is an ICT teacher.  The other is for an Religious Studies teacher which as a subject didn't readily lend itself to a suitable design, so instead I came up with a cute coffee cup and spoon. 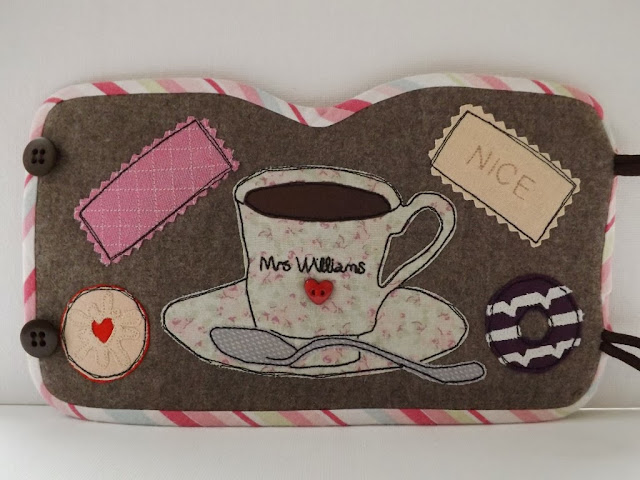 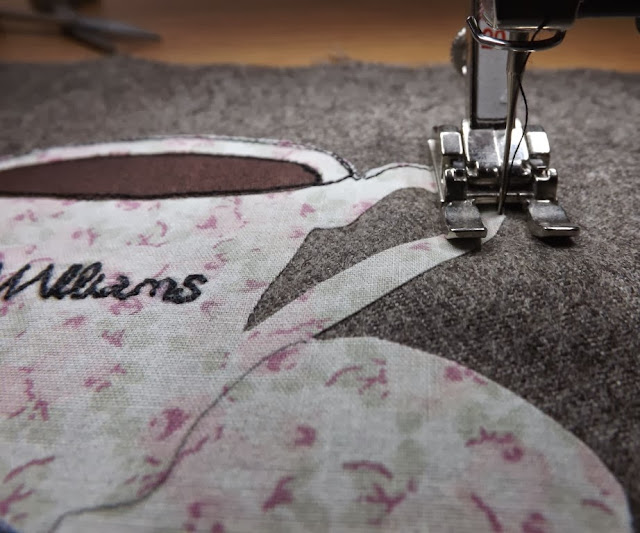 In homage to the traditionally British Panto I then added appliqued English biscuits to the design.  These are very different to the more American cookies and perhaps an acquired taste.  Pink wafers are a real blast from the past for me, although I'm not sure I would want to eat too many of them as an adult! 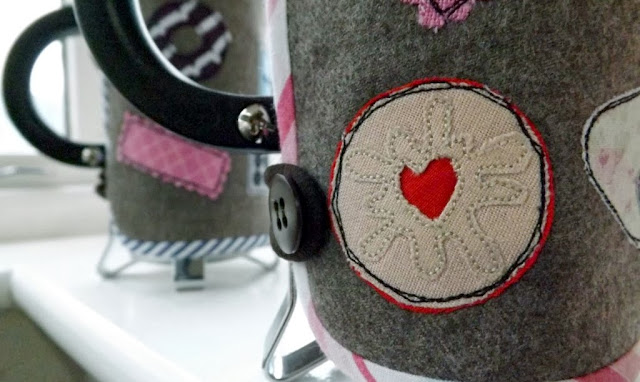 I was particularly pleased with how the "Jammie Dodger" turned out. They've been an iconic British biscuit for over fifty years, and were originally named after Roger the Dodger from The Beano. 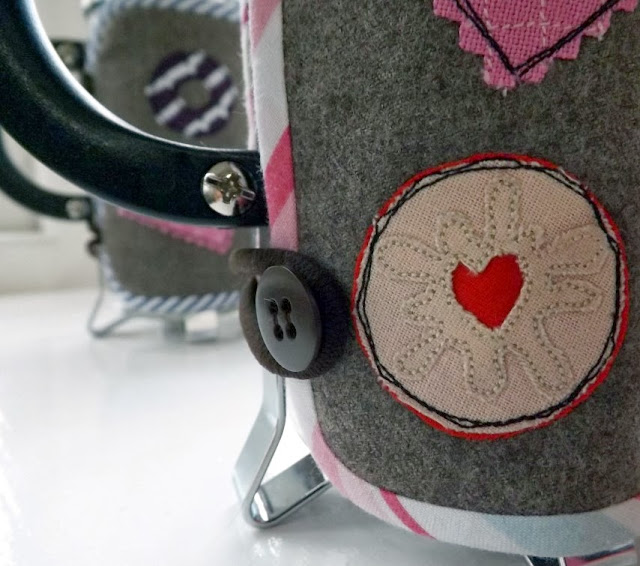 Other classics featured are a 'Nice' biscuit, a coconut flavoured delicacy which was first mentioned in an 'Army and Navy Co-operative' price list in 1895.  A 'Bourbon Cream' introduced to the world in 1910 by 'Peek Freans' and finally the baby of the group a 'Fox's Party Ring'  created a mere 30 years ago in 1983. 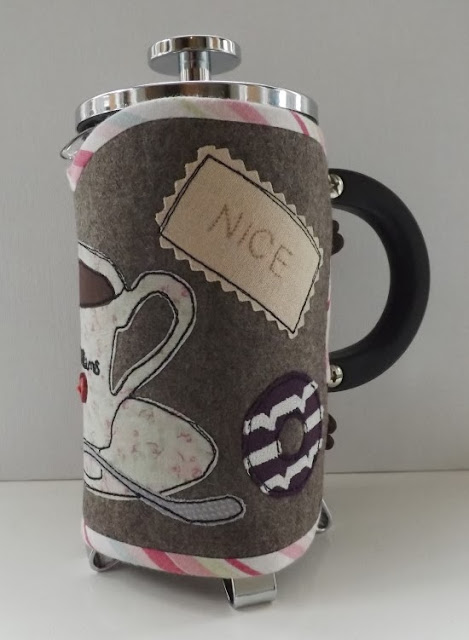 I managed to rip one of the bags of coffee as I 'carefully' opened the original packaging and so I toddled off to the local supermarket to buy a couple more packs of Starbucks' grounds but as they weren't Fairtrade I refused to buy them.  So if you're reading this Mr or Mrs Starbucks I want my coffee to be Rainforest Certified and Fairtrade please!