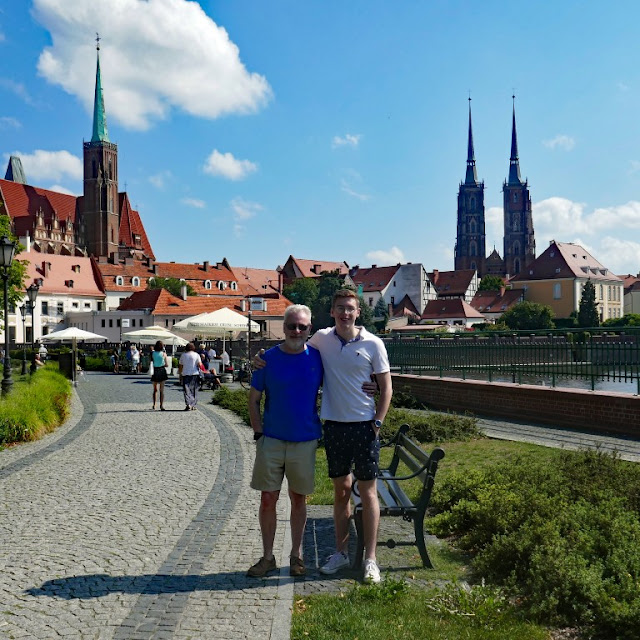 For the second part of our 2019 Polish experience we headed to Wrocław and we were not disappointed!  It's Poland's fourth largest city, with a student population of 150,000, and we found it wonderfully vibrant, youthful and multicultural.

The Old Town (Stare Miasto) is equally as beautiful as the more commonly visited cities of Gdańsk and Kraków, with architecture in the Bohemian, Austrian and Prussian styles.  The city is situated on the Oder River and it is actually made up of 12 islands with over 120 bridges linking them!  As we wandered along the peaceful wooded river banks it was hard to believe we were in the middle of a large and bustling city. 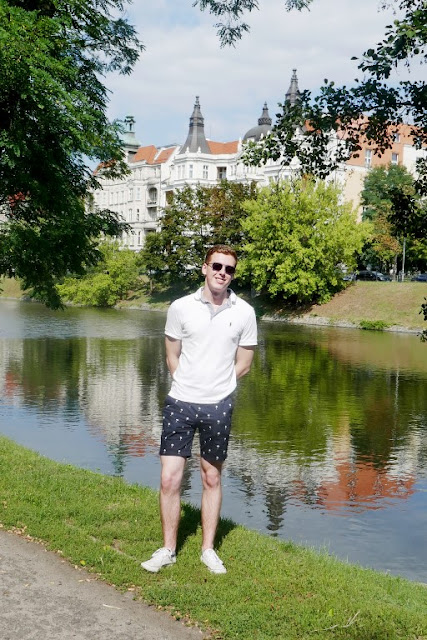 Wrocław was full of surprises and every street we turned into offered yet another architectural gem waiting to be discovered and this 'castle' is actually the railway station!  It was repainted for the UEFA 2012 Football Championship and the bright orange colour was so beautiful bathed in the glow of the early evening sun. 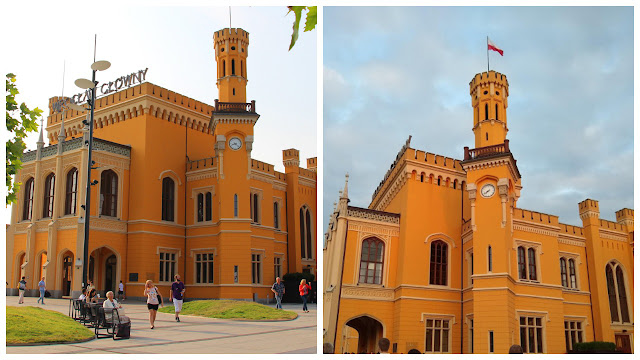 Underneath a viaduct near the station, we spotted this great example of urban art based on illustrations by Grzegorz Przybysi. It was painted in 2012 to promote the album 'Kosmostumostów' by Łukasz Rostkowski (LUC), a Polish rapper and music producer. The album's theme is the life of LUC set against the background of  life in Wrocław, "The city of a hundred bridges". 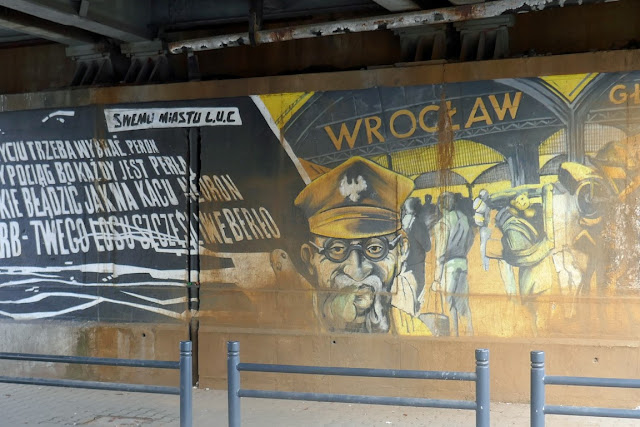 One of Wrocław's most poignant artworks is 'Przejscie' by Jerzy Kalina, known in English as 'The Anonymous Pedestrians'.  It was installed in December 2005 to mark the 24th anniversary of the introduction of martial law and the many people who disappeared or 'went underground'. There are fourteen statues in total.  Seven on one side of the road slowly disappearing underground whilst on the other side of the road another seven pedestrians emerge from the pavement.  My photos show the re-emerging figures with those submerging just visible in the background. 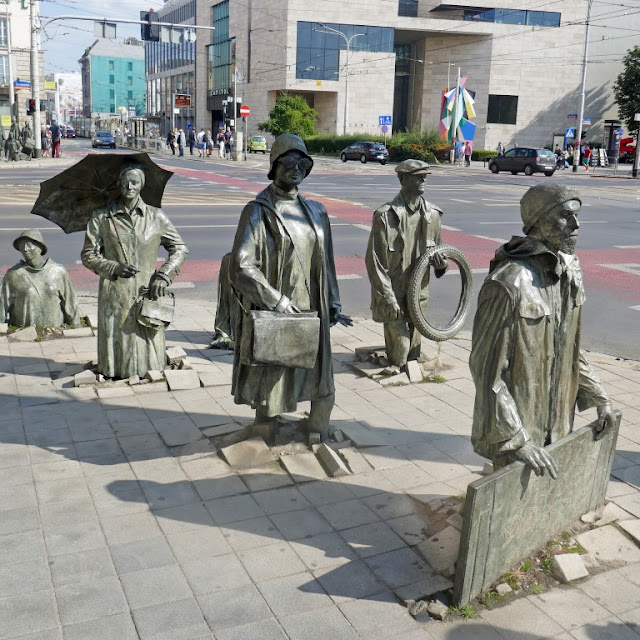 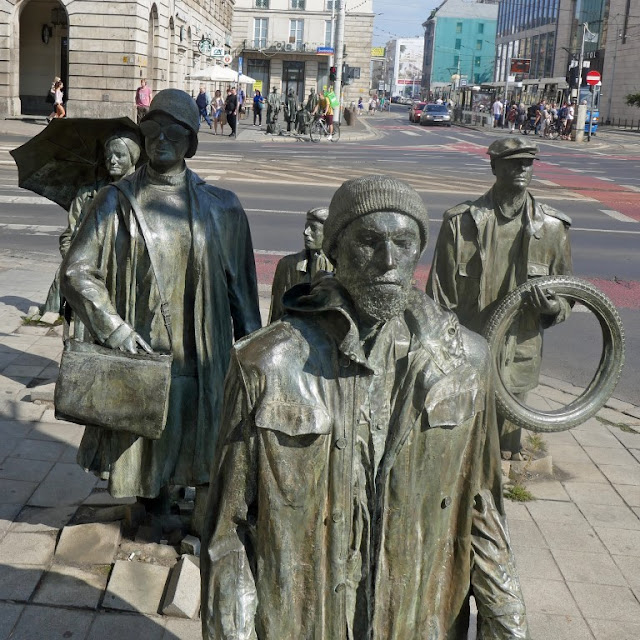 On the second day of our trip we took the tram out to Centennial Hall, an absolutely massive reinforced concrete structure, which despite looking like it has come straight out of a Star War's film, was actually completed in 1913! 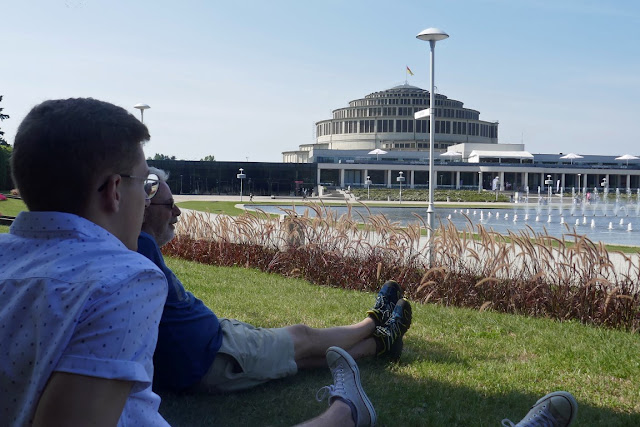 It's a striking example of early modernism and has rightly been awarded UNESCO World Heritage site status. A structural engineering marvel with an inner diameter of 65 (216 feet) metres and a height of 42 metres it is huge and hosted speakers as diverse as Pope John Paul II and Adolf Hitler! 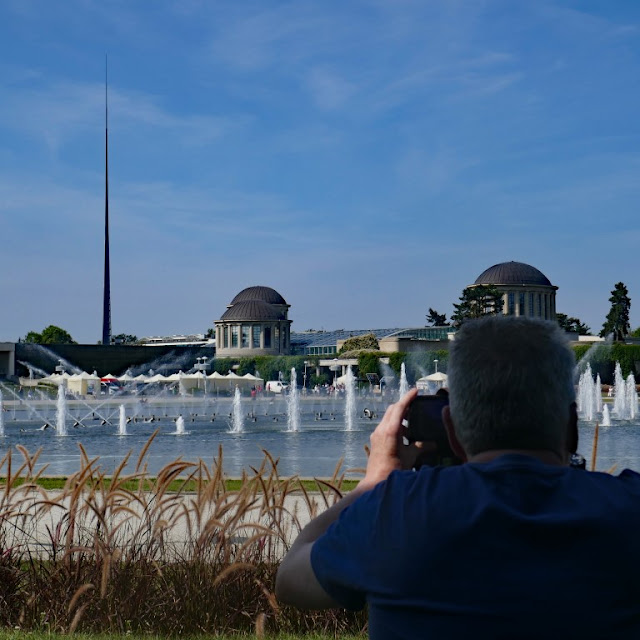 The tall thin thing you can see sticking up is the 'Iglica' or needle. A communist structure constructed in 1948 to celebrate the 'Regained Territories' after the Second World War.

The multimedia fountain in front of the Hall is the largest in Poland and has over 800 lights and 300 water jets.  There are free shows every hour, which we had been told were spectacular, but we were frankly underwhelmed.  I guess it must work better in the evening when the coloured lights can also be seen. 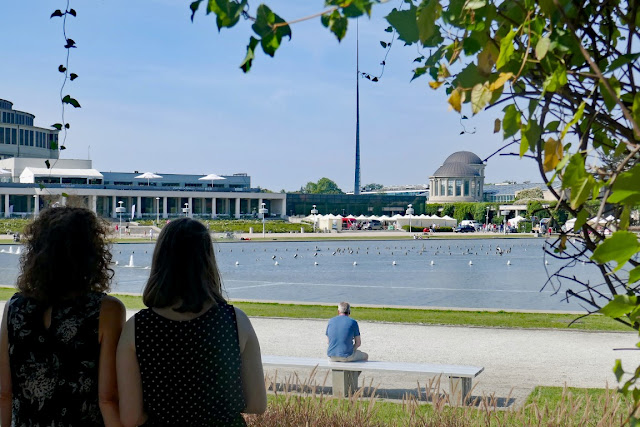 We stayed at the Novotel Centrum Hotel, and the staff (especially Kamil) were lovely and it thoroughly deserves its status as Wrocław's top ranked hotel on TripAdvisor!  We were on the 8th floor and our rooms had huge picture windows boasting fabulous views towards the Old Town.

This is what we were greeted by each morning when we drew back the curtains! 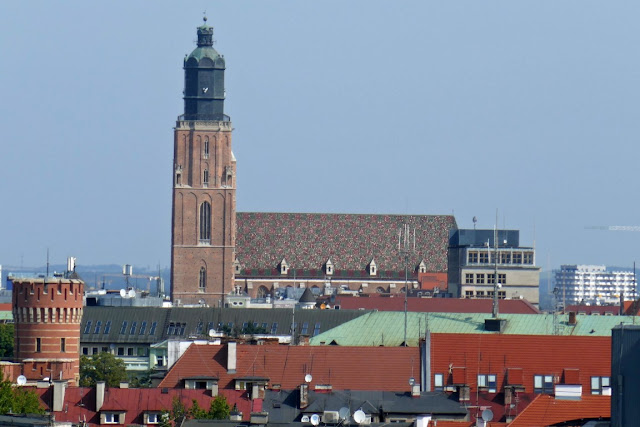 The church is St. Elizabeth's and its 90 metre tower offers some of the best views in  Wrocław, so it was definitely on our to do list. The 300(!) spiral steps leading up to the viewing platform are pretty narrow and it was quite a squeeze each time we passed someone going in the opposite direction, so probably not the best choice if you suffer from claustrophobia! 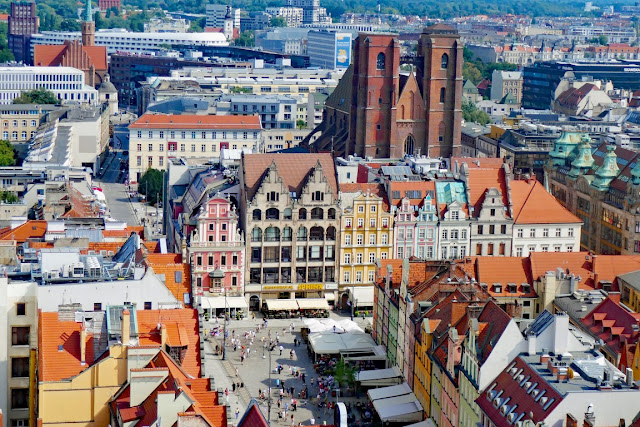 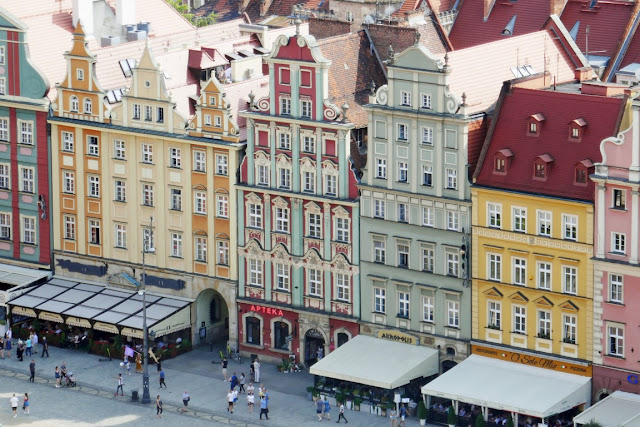 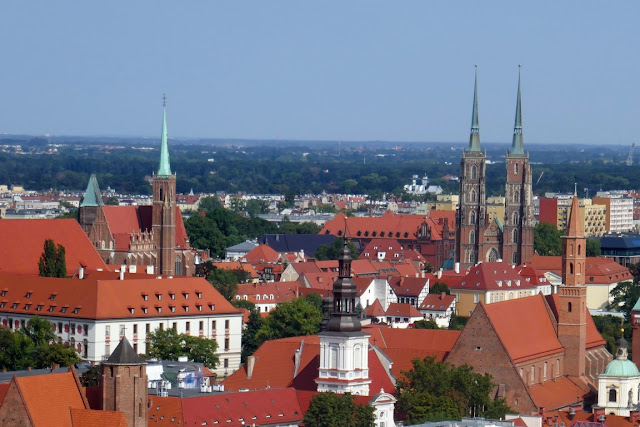 Back at ground level we set about exploring the market square (Rynek) and one of the most eye catching buildings is definitely the Old Town Hall (Stary Ratusz), a Gothic building dating from the 13th century.  Don't you think it looks exactly like a real life gingerbread house? We just needed Hansel and Gretel to complete the picture but I made do with the two men from my very own fairytale! 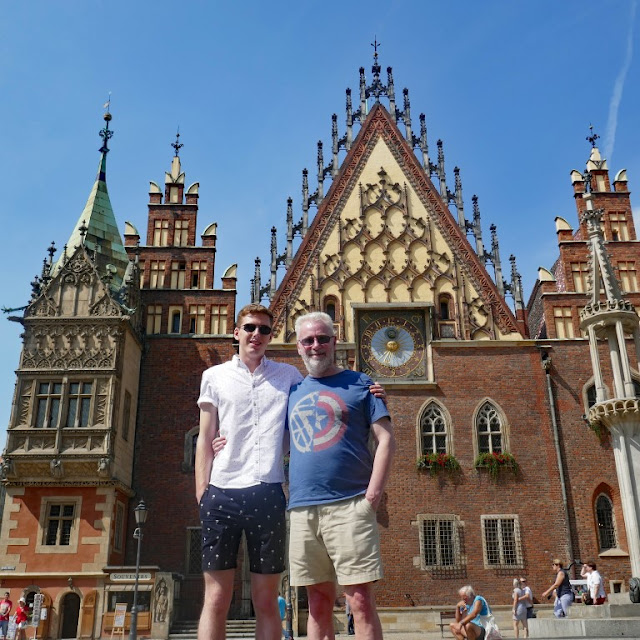 Whilst in the market place I got to practise a bit more of my linguistic skills when a gentleman came up to us and began to speak in Polish.  I was able to explain that I could only manage a little of the language but after my efforts he insisted on giving me flowers!

Quick aside, has anyone else found as they hit middle-age that their hair has become curlier?  I have always had wavy hair but over the last few years I have begun to look more and more like a 1970s throwback, with my very own homage to Kevin Keegan's infamous perm! 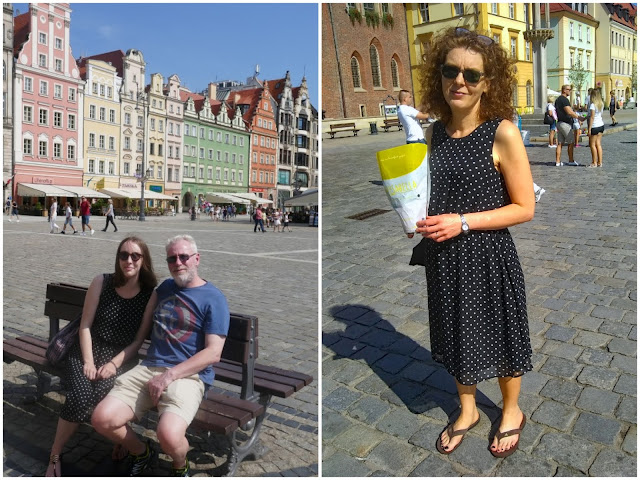 Soaking up the sun (and views) in wonderful Wrocław 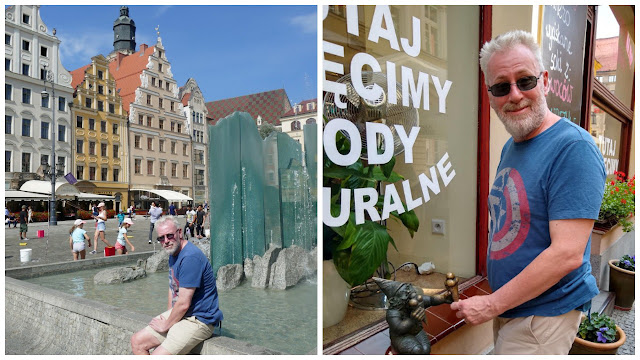 Finally, no blog post on Wrocław would be complete without dwarves - The city is inundated with them!  There's actually a serious message and history behind these adorable little folk.  So, if you have five minutes to spare, do pop over to the BBC's travel page or this blog but be warned that you'll be risking cuteness overload!

I had expected they would be a bit naff and touristy but I absolutely loved them!  You can purchase a map or download an app to search for them but we were happy just to stumble across them.  However, this laid back approach soon morphed into a very competitive family challenge as we each battled to win the crown of Chief Dwarf Spotter! 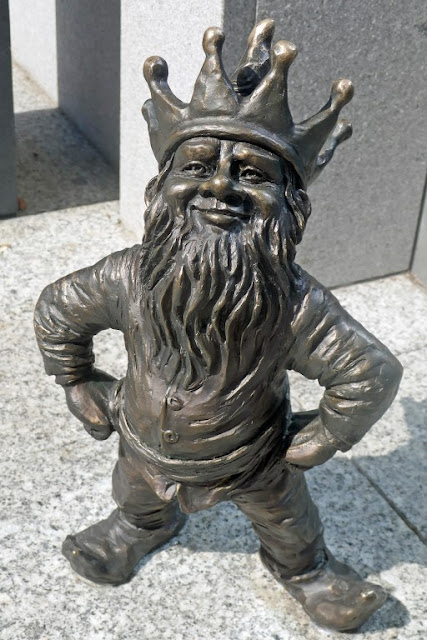